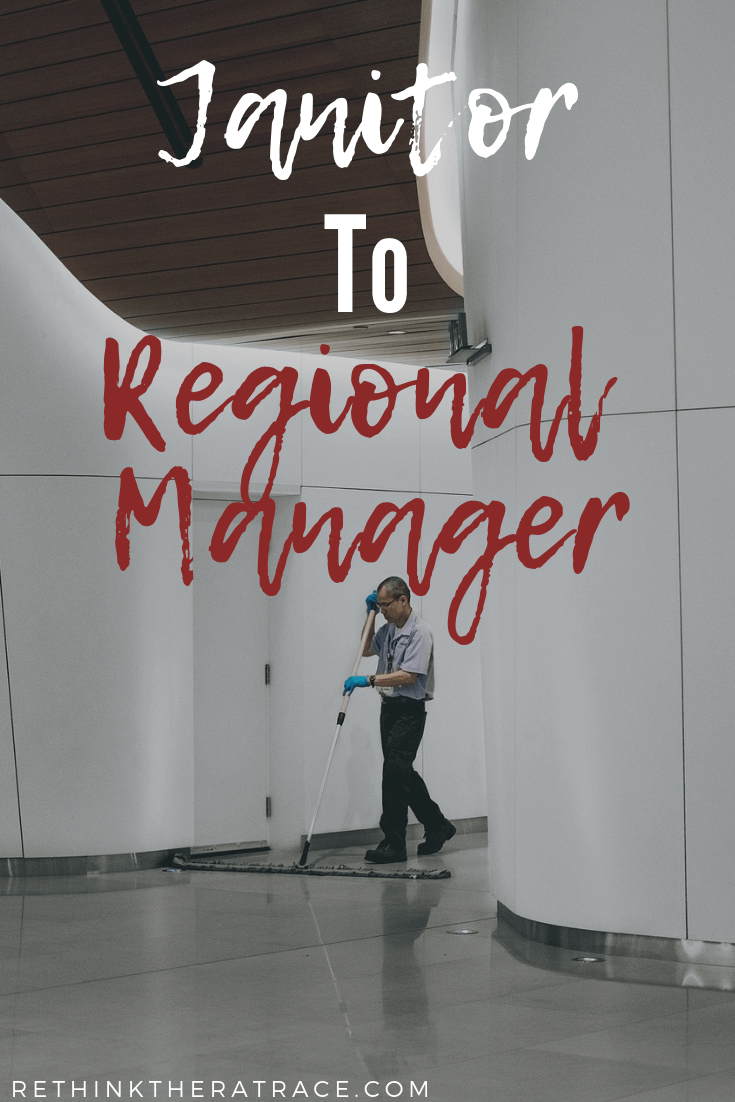 College was never really my thing. Unfortunately, high school was incredibly easy for me and it did little to prepare me for higher education. My college experience could be summed up by a couple of years of taking bullshit classes. In less than two years, I had three different majors, and I still genuinely didn’t know what I wanted to do with my life.
I suppose that I was lucky that my family was incredibly poor because Pell grants covered my tuition at the local community college. Part-time retail jobs gave me some spending money through college, and I spent every dime that came in. Once I realized how much I didn’t enjoy nursing (my third major), I quit nursing school without any other plans and nothing to fall back on. What started as a semester off, turned into a couple of years off. Which I regret, but in hindsight, it may not have set me back as much as I thought, and later on you’ll see why. We are going to break down each promotion, demotion, and job hop, along with a running tally of the pay increases as we go.

Working part-time at a nutrition store wasn’t the future I had hoped for, and even that came tumbling down. A series of unfortunate events left me without a job. With no degree, no experience, and no money I had very little prospects.
That is where the story begins, in July of 2014, as a penniless unemployed bum. I was lucky enough to have a friend that worked at a local gym, and they were looking for someone to help out with cleaning. A janitor of a gym isn’t exactly what kids dream of doing but, it was a job, and I desperately needed one. Making a whopping $10 an hour for 20 hours a week. $10,400 a year before taxes. But…did I mention that I got a free gym membership out of it? #soFI
It didn’t take long for my work ethic, and people skills to get noticed by the gym managers and owners. Within a month, the director of personal training was trying to get me to be one of their trainers, and the gym owner was recruiting me to be one of the full-time sales staff. Eventually, I took what I considered to be the less fun, but safer choice of making the owner happy by becoming a sales person. My hourly pay dropped to $7.25 an hour, but I got $15 per sale, and I was pretty good at that part, so it helped. $15,080 before taxes + commission a year.
You’d be amazed at how much giving a shit can move you up the pecking order, which is a common theme throughout my employment history. Showing up on time, doing what you are supposed to, and being able to carry on a conversation are all things that many people can’t seem to do. At the end of the year, a management position opened up at one of the other gyms, and I jumped at the opportunity to move up, even though I was warned that it sucked. My pay increased to $12 an hour + $15 commission for sales. $24,960 before taxes + commission per year. The management experience in this situation proved to be worth far more than the pay raise, because it got my foot in the door for future management positions.
$24,960 – $10,400 = $14,560 pay increase

Managing the gym was good but, without any continuing challenges or responsibilities, boredom set in after a few months. A potential promotion, into a role that would be created for me, was a carrot on a stick that the owners kept dangling just out of reach that kept me busy for a couple of months. But, I soon grew tired of the moving goal posts, and the lack of advancement opportunity and moved onto another company.
Toward the end of my tenure at the gym, I was making it rain applications like they were dollar bills in a rap video. Luckily one of them stuck. In July, I found myself back at the familiar place at the bottom of the totem pole, as a physical therapy technician. However, there was plenty of upward mobility for promotions. The move was a demotion of sorts in that I wasn’t a manager anymore, and my pay remained at $12 an hour, but without the commissions. $24,960 before taxes per year.
While 2015 was a slower year for career advancement, the move that was made were definitely beneficial. There is a tendency for people in the gym industry to get pigeonholed and stuck in that field forever, just jumping from gym to gym and really getting nowhere. We didn’t want that to happen to me.
Maintained $14,560 pay increase

2016 began with another promotion. This is where the management experience of the gym really helped me out. It didn’t hurt that timeliness, an eagerness to learn new things, and soft skills were traits that I became known for. One of the managers in another clinic was leaving, and her position was ripe for the taking. This was before our penchant for negotiation, and my inexperience led me to accept the first offer that was made. $17 an hour, or $35,360 before taxes per year.
While 2016 only had one move career-wise, it proved to be one of the biggest years of our lives. One of our patients, at the clinic I was promoted to, led us to find out about Financial Independence and Early Retirement through Mr. Money Mustache, which was more beneficial for our future than any job promotion could’ve been. (Side note: Thank you Mrs. P for changing our lives! I am forever indebted to you.)
$35,360 – $10,400 = $24,960 increase

I continued to manage the clinic for a little over a year, and only left because we moved to St. Louis. While leaving was hard, it became another great decision for us not only career wise, but we also grew much closer together as a couple.
In St. Louis, Mrs. RRR didn’t have to worry about finding a job as we were moving because she was transferred. Again, I started the familiar job search. I would’ve taken just about any job, but I managed to hit the jackpot by finding a job doing essentially the same thing I was doing before at a physical therapy clinic. No managing this time, so my pay slightly dropped back down to $15 an hour or $31,200 per year.
We moved back to Huntsville about 6 months later, and I managed to get hired back with my old company, but this time managing a smaller clinic. As they didn’t have to train me at all, and because I had left on good terms and they knew I was a diligent worker, it was an easy choice for both parties. This time, I negotiated a higher salary for $18.75 an hour or $39,000 a year.
$39,000 – $10,400 = $28,600 pay increase

The workload of a smaller clinic was easy, not particularly challenging, but a nice change of pace. However, the company had other things in mind. My replacement at the larger clinic turned in her notice, and the next day they asked me if I would come back. ‘Will it come with a raise?’, I inquired. They said it wouldn’t, so I kindly declined. A week passed, and they came back and asked if I would manage it for a raise. We went back and forth a few times ironing out the salary, and I ended up making a lateral move, back into my old job for $21.15 an hour or $44,000 a year. If you aren’t keeping track, this is the exact same position I was in a year before, but this time I was making $9,000 more a year. (Read more about the move and subsequent pay raises here: How Sacrificing My Job for Adventure Advanced My Career 5 Years)
$44,000 – $10,400 = $33,600 pay increase

Yet again, restlessness and boredom set in. Even after asking for more responsibilities and more things to do, the repetitiveness of the job was getting at me. I began applying for other jobs, but as luck would have it, an opportunity for a promotion came up. The position is something I’ve been biding my time for. A spot in healthcare middle-management is just what the doctor ordered. So, our year began with me getting a promotion in February. The salary increase wasn’t quite the jump we had hoped for, and I am confident that I negotiated to their top dollar. However, after my pay increase, monthly vehicle reimbursement, & monthly phone allowance, compensation is sitting right at $26.44 an hour or $55,000 a year. On top of that, there’s a $250-$450 bonus every month if my region that I’m managing hits their targets. So, we are talking an extra $3,000-$5,400 a year. More importantly to me, I have the option to occasionally work from home. Also, the icing on the cake is that I get to put this multi-unit manager experience on my resume in case I ever need to get another job.
$55,000 – $10,400 = $44,600 pay increase + bonuses
And this is where we find ourselves now. Earlier in the article, a bold claim was made that not finishing my degree may not have set me back too much, and we are going to explain why now. Somewhere along this process of job hopping, I was looking into how many hours of classes I’d taken in college, and it turns out that I had way more than I needed for an associate degree. Just like that, after filling out a couple of forms, I had my associates degree in business. All of a sudden, I felt less like a failure. Nothing will make you feel quite as inadequate as not having a degree when someone asks what your degree is in. I’m going to blame society for that one.
One thing I did manage to avoid was student loan debt. According to our friends over at The College Investor the average student loan debt is $37,000 with a monthly payment of $351. According to data from the Bureau of Labor breaking down average incomes per education showed that some college education got you paid $38,000, having an associates averaged out to $41,500, and the average bachelors degree holder made $59,000. When you combine these two statistics of paying $4,212 a year to get a degree that’ll make you $59,000 a year, you’re left with $54,788. Or, practically what I get paid now.
This shows that working hard, and job hopping could have garnered me more yearly than going into debt for a four-year degree would have, especially if I had gone for something that has no pay-off in terms of salary. Or, I could’ve finished college with a bachelors and maintained my motivation up the ladder and be making double what I make now. Who knows? All I know is that it didn’t turn out as bad as I thought it would. One thing that was consistent throughout the whole process was my wonderful wife who believed in me, even when I didn’t believe in myself. 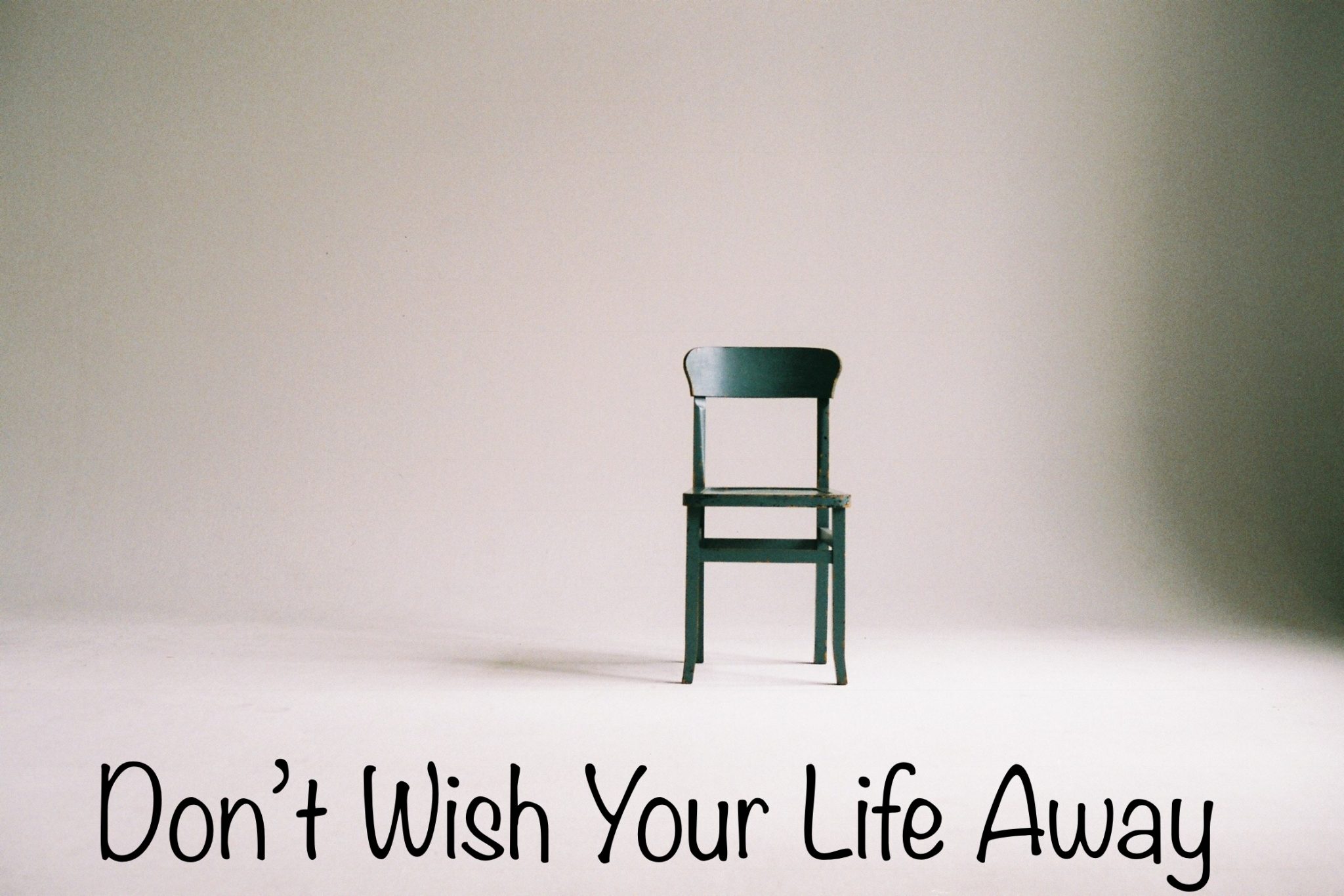 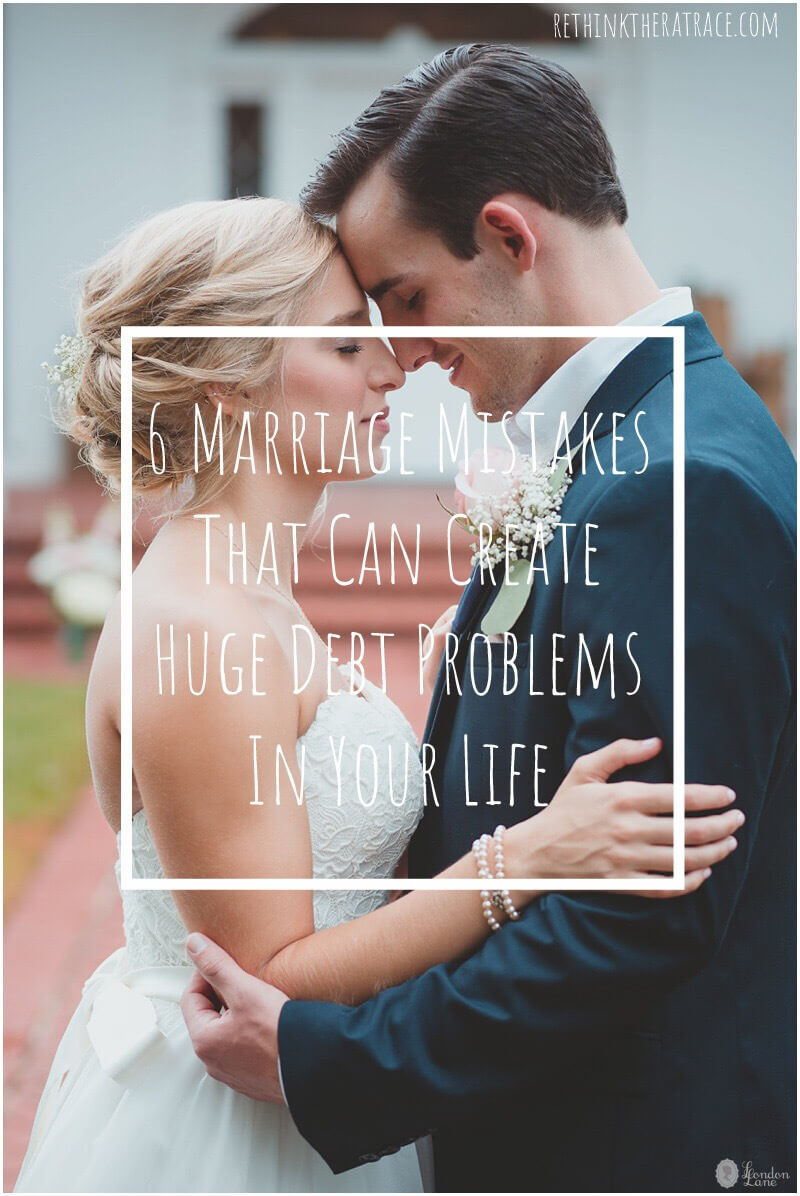 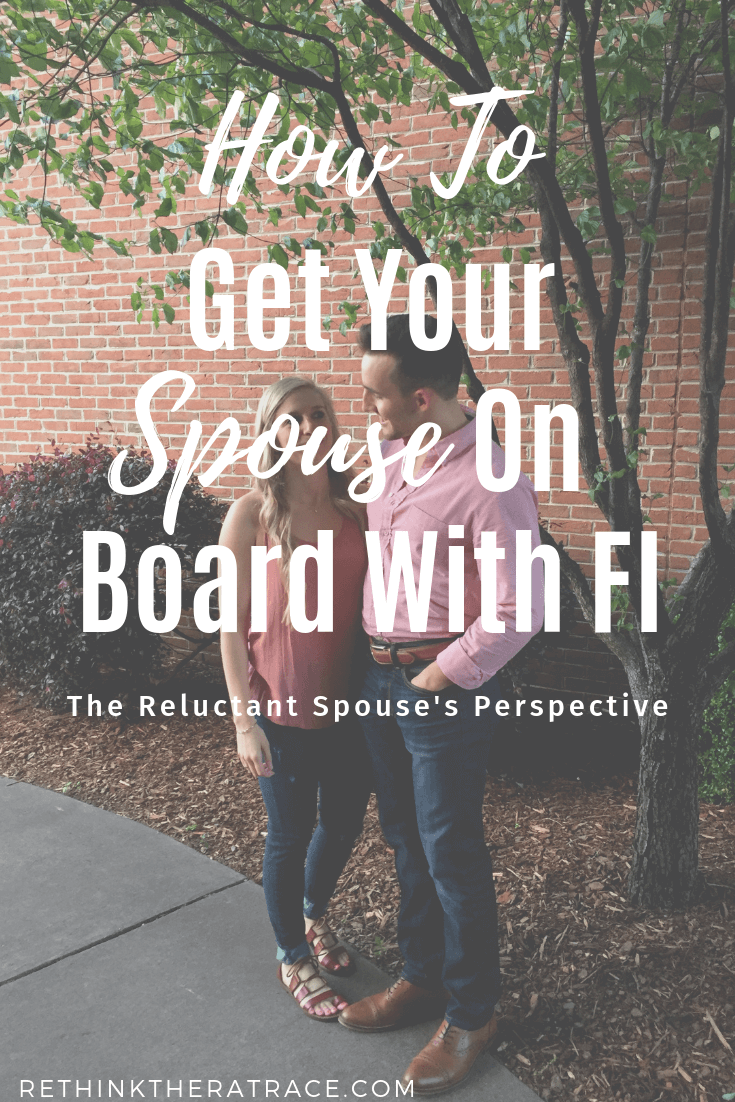 How To Get Your Spouse On Board With FI