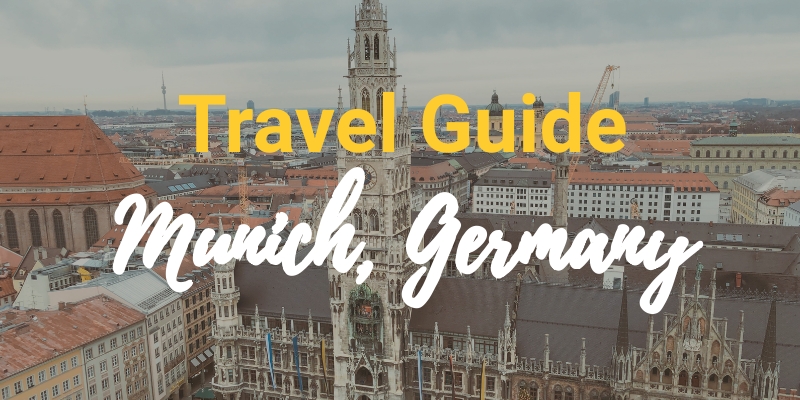 When we originally relocated to Cyprus, we were really looking forward to a mild winter. Lo-and-behold though, we accepted a house sit in Munich in December and braced ourselves for the cold.

As much as I hate the cold, December really is an amazing time to visit Munich. There’s nothing quite like visiting the German Christmas markets and drinking mulled wine while enjoying all the Christmas festivities.  Since we spent 3 weeks in Munich, we found all of the best places to visit during your stay in Munich.

Check out our Travel Resources to see how we travel the world like pros for free.

Really, you can’t go wrong with anywhere you stay in Munich in December.

The beautiful city contains lots of cute neighborhoods with restaurants, shops, and sights. Public transportation is easily accessible in almost any area, which makes it very convenient to hop on a train when your feet get too tired from walking.

With that being said, we really liked the feel of the Schwabing-West neighborhood that we stayed during our December in Munich.

Before we arrived in Munich, I had no clue about any of the districts or neighborhoods in Munich. The only thing we knew is that we were staying in the bohemian district of Schwabing-West.

Once we arrived at our place, we quickly realized this is a perfect area to stay. Schwabing is located right beside the English Gardens, which is one of the world’s largest parks.

Also, Schwabing is a 30-minute walk down a popular street or a 10-minute train ride from Munich’s city center.

Schwabing is far enough from the city center so you’re not in the hustle and bustle of all the other tourists, but it still has everything from bars to grocery stores to pharmacies. Schwabing is a young and trendy area with plenty of local restaurants, bars, and shops to explore, and is a great place to stay during a visit to Munich in December

Things To Do in Munich in December

We were in Munich for 3 weeks in December, and let me just tell you, that was not nearly enough time to see everything the city has to offer.

However, we tried our best to go out every day and explore something or somewhere new.

One thing we do when we’re in a new city is taking the time to walk wherever we’re going. We not only get exercise by walking, but we’re also seeing things we might miss if we take an underground train or other forms of transportation.

The oldest & busiest Christmas market in Munich is located at Marienplatz. Last year the market ran from November 27-December 24, but you can find up to date information about the market here.

If you don’t like dealing with large crowds, the Chinese Tower Christmas Market, located in the English Gardens, is a great alternative. You still get all of the benefits of a market without all the hoards of people.

There are also a handful of other smaller Christmas markets in Munich in December that are definitely worth visiting. 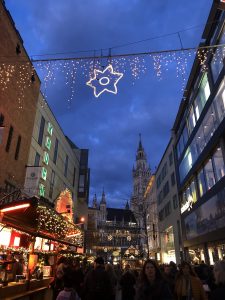 Speaking of the English Gardens, this place is a can’t miss. Figuratively & literally because it’s one of the world’s largest parks, but also because there is plenty to do and see.

You can do everything from walk off all of the beer and pretzels to having a picnic lunch, to watching year-round surfers on the Eisbach Wave. These surfers are there all times of day throughout the month of December. We even saw them when the temps were below freezing a few days during our trip to Munich in December

Another can’t miss landmark in the English Gardens is the Monopteros which is a pavilion with Greek-style columns. There are areas of the English Garden during the warmer months that are clothing optional so be sure to prepare to avert your eyes if you’re wandering aimlessly. We didn’t notice any nudists in the park during December, but if a warm front rolls in, the clothes might roll-off.

Also, in the English Garden, there’s a Biergarten at the aforementioned Chinese Tower which is a great place to drink a few of the local Helles lagers and people watch.

#3 Alte Utting, AKA Boat on a Bridge

Located on a railway bridge in Munich is a passenger ship that’s been converted to a really cool spot. You can enjoy a beer and a meal in the boat while having a chat with friends. Or you can bring your beer out to the bridge and be entertained with live music.

There are plenty of street food vendors outside the boat if you’re feeling a little hungry, who are there even in December. You’ll also find some tents set up selling knickknacks and random things that would be good for gifts if you’re looking for some locally sourced Christmas gifts from Munich in December.

Whether you visited Marienplatz for the Christmas market, or you’re there during another time of year, there is so much do in Marienplatz Square and the surrounding area.

For only €2, you can make your way up to the watchtower of St. Peter’s Church for a 360 view of the city. It is a hard-earned climb to the top, but well worth the money and exercise.

Also, just around the corner, there’s a large outdoor market where you can find produce, schnitzel, bratwurst, sauerkraut, and all sorts of stereotypical German fare.

Visiting museums in Munich is a must-do, especially if it’s a particularly cold or rainy day which can happen regularly on a trip to Munich in December.

If you happen to be visiting Munich on a weekend, you’re in luck because there’s a lot of museums that have admission for €1 on Sundays. This is not only the perfect time to visit a museum, but also helps you see one without breaking the travel budget.

We took advantage of this to go check out the Modern Art Museum. Let’s just say that it was an interesting experience, and definitely worth the €1 entry price.

One museum that doesn’t offer the Sunday discount is the BMW museum. We met up with our friends, the Waffles on Wednesday, in Munich and the guys and girls went our separate ways. While James & Mr. WOW thoroughly enjoyed the BMW museum, Mrs. WOW and myself walked around the BMW Welt.

If the BMW museum doesn’t interest you, the BMW Welt allows you to walk inside their elaborate show-room and look at all sorts of BMWs, Rolls Royce’s, and Mini Coopers. The BMW Welt also has an area dedicated to their motorcycles where you can hop on and see how they feel.

Olympic Park is not only the location of the 1972 Summer Olympics, but it also holds a historical & heavy past.

There is a memorial site honoring the Israeli team members from the tragedy that happened at the Olympic games of 1972, known as the Munich Massacre.

If you aren’t familiar, a Palestinian terrorist group captured 11 members of the Israeli Olympic Team and murdered them. It is the story behind the  Right across from the memorial is the Olympic Village where the tragedy happened.

Outside of this dark history, the park itself is very nice. With countless paths to explore, you’ll get great views of the surrounding city, the Olympic Stadium, and the Olympic Tower.

Places To Eat in Munich

There are a plethora of options in Munich to satisfy any food-lover. Restaurants & cafes are a great way to escape the cold or rain in Munich in December.

Whether you’re looking for an authentic German cuisine or taking a healthier route by opting for a vegan meal, you will be able to fill all your gastronomic needs.

This is a vegan restaurant, but even if you’re not a vegan, this restaurant will not disappoint.

The Katzentempel Munichen restaurant is a haven for beautiful rescue cats who were in need of a loving home. Purchasing a meal here will not only be healthy, but it also helps fund this temple for rescued cats.

You can enjoy a coffee or light lunch while petting cats or watching them play around their safe haven.

Not only is the company and atmosphere great, but the food is amazing as well.

The opposite of a vegan restaurant, we visited this restaurant with friends because of the selection of craft beers and the menu of smoked meats.

This rustic restaurant had a cozy feel with the decorations and friendless of the staff. We highly recommend this restaurant, especially if you enjoy trying different craft beers.

We were invited to meet a new friend here, and we were glad to have tried this place.

Here, you can try an array of homemade, local, & international wines along with the options that are on the daily menu.

We tried the vegetable quiche with salad, and the pesto pasta dish, and left full and satisfied. Whether you’re going here with friends or just an afternoon lunch, you won’t be disappointed.

*This place only accepts cash or the German Mastercard, so come prepared.

It would be a crime to go to Munich and not visit the original Hofbräuhaus.

When we went, we were able to find an empty table to enjoy liters of beer and pretzels. We recommend avoiding meals at Hofbräuhaus because it’s such a busy restaurant, and their specialty is beer, not food.

Regardless, it’s fun to drink a beer while listening to live Bavarian music. Also, the pretzels are great!

We consider Augustiner a better version of the Hofbräuhaus as they have a great Helles beer, they’re a little more authentic, and they aren’t crawling with tourists like ourselves.

If you’re in the mood for a craft brew beer from a pub, give this place a try.

With over 40 different beers available, it’s guaranteed that you’re going to find one you really enjoy. We had a few beers along with pretzels and beer cheese, and it was a great experience.

The bartenders are great at making suggestions of beers, food, and local places to visit and eat.

I mentioned this boat on a bridge earlier on the post, but the coolest thing to do is a drink a beer inside the boat.

When you purchase a beer from the bar, you put down a deposit and get a chip in return. Make sure you hold onto that chip because you’ll be able to exchange your empty glass bottles for that deposit you put down.

*It’s important to note that not a lot of restaurants accept credit cards. To save yourself the trouble and embarrassment, it’s best to carry cash with you everywhere you visit in Munich.

There are ATMs scattered throughout the city, but it’s best to avoid Travelex, Euronet, Moneybox, Yourcash, Cardpoint, and Cashzone. These ATMs have really high fees and trick you by using a ‘dynamic currency conversion’, essentially taking advantage of tourists who aren’t familiar with the local currency or exchange rates.

Our Conclusion to Munich in December

Does reading all of this make you want to go to Munich, Germany in December?

I never expected to make a trip to Munich during December for days of cold, wet, and grey weather, but it was worth dealing with the cold for the mulled wine at the Christmas Markets and liters of beer and pretzels at beer halls.

While I loved visiting all of the Christmas Markets and spending our December in Munich, I think summer and fall would be the best time to go to enjoy a picnic in the English Gardens or have a beer at Octoberfest.

Have you been to Munich? If so, what are your favorite things to do or favorite restaurants? 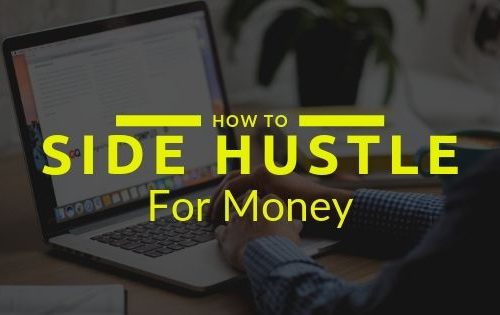 Side Hustle for Money 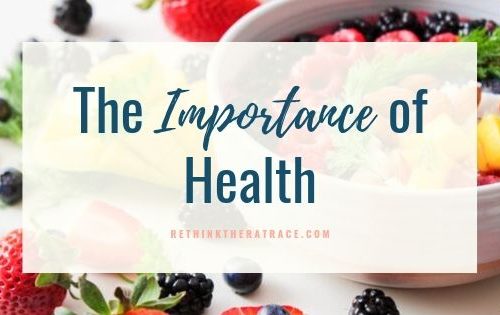 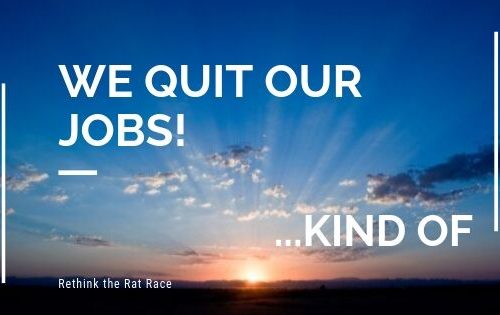 How We Quit Our Jobs…Kind Of