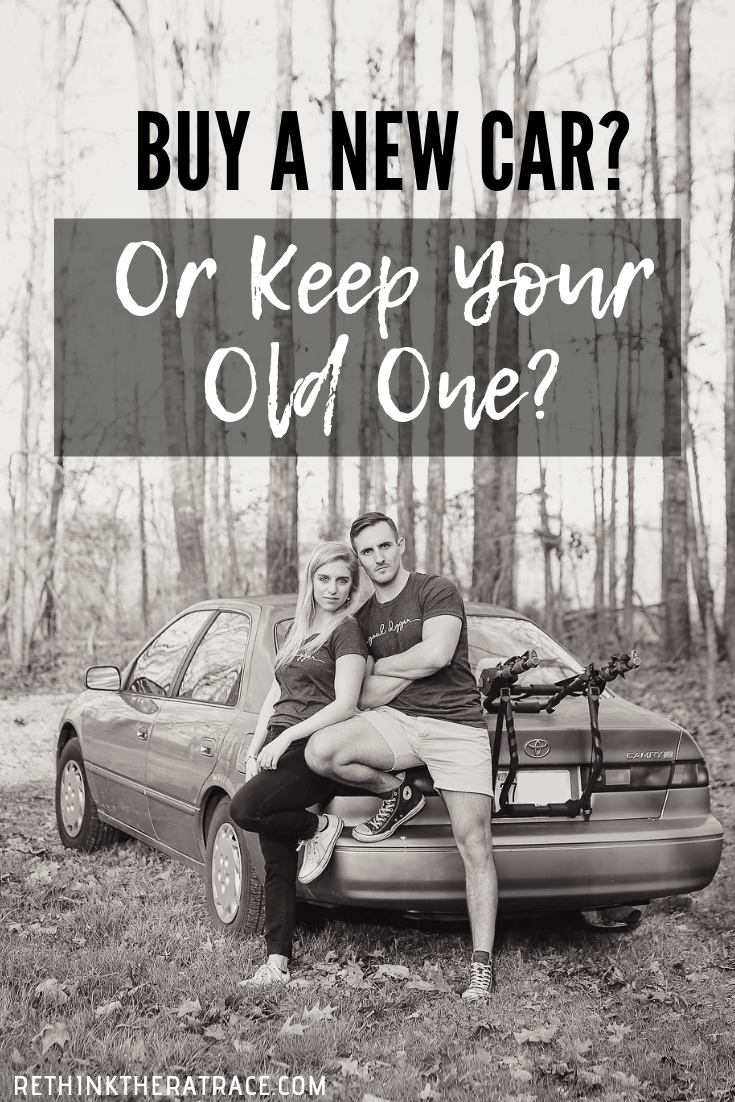 Should I Buy a New Car, a Used Car, or Keep My Old Car?

You may be asking yourself: Should I Buy a New Car, a Used Car, or Keep My Old Car? We would love to help you clarify that, but first, an anecdote. Less than a month after Mrs. RRR and I got married, we got pressured to do one thing. Amazingly, it wasn’t having kids…..yet (our families have since cranked this pressure up to a mild 7), but it was to get a new car. For some reason, the second we got married, the ’97 Toyota Camry that Mrs. RRR brought into the marriage became unsafe and inadequate, and everyone and their momma thought they knew best for us by telling us to get rid of it. Why, though?

Toyota’s are long known for their reliability, and this one was no different. Other than a couple of cosmetic issues, the Camry showed no clear signs yet of slowing down. When we got married three years ago, it had 244k miles, so the car had already made it past the two big milestones where it loses a ton of value: 100k and 200k miles. Frankly, we never even considered getting rid of it. We never felt like it was a “death trap” despite what some family members said. Besides, what would we get for it anyway? According to KBB it was worth $800-$2,200 back then on the private party market (LOL. Try selling an 18 year old car with ~250k miles on it for $2,200 and get back with me), and a whopping $180-$740 as a trade in. 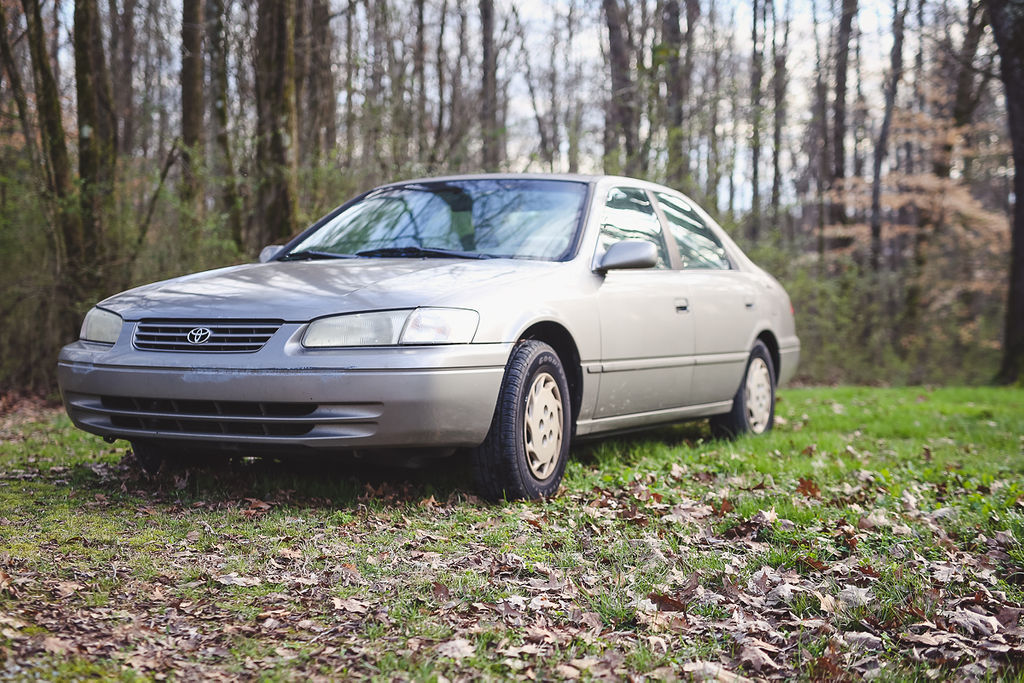 Well, surprise y’all, the ol’ bitch made it another 3 years and to 300,000 miles! To put that number in perspective, it’s the equivalent of driving around the earth 12 times. Or, she’s making a round trip to the moon and has already got there and is 1/4 of the way back to earth.

Literally the only thing we’ve had to do outside the typical maintenance is change the spark plugs. Hell, changing the spark plugs is still considered routine maintenance. We’ve racked up some miles in it the past three years, but that’s partially due to the move to St. Louis, the move back, countless trips 2+ hours to see friends and family, and it’s our daily driver. But, as we all know, driving an old used car costs more than buying a new one. Exactly how much money have we “lost” vs. how much we would’ve “saved” by buying a newer car?

One of the biggest arguments for buying a newer car is the reliability and the things that could go wrong with an older car. By purchasing a new or newer car, you get to forego all those unexpected issues in an older car, but how much does that cost you? For the sake of comparison we are going to calculate the cost of three vehicles: the average new car, the average used car, and our shitty ol’ Camry. Of course, it goes without saying that your miles may vary (pun intended) but we are talking about ours here.
We are using the average monthly payment for a new car (January 2019), average payment for a used car (November 2018), and our monthly payment of a whopping zero dollars (Every damn month since 2015). Then, we calculate the average cost of the most frequent and common maintenance: a synthetic oil change. At a bargain of $45 per oil change ÷ 3 because you have to get those done every 3 months or 3k miles…at least what the oil people say. So, the cost for those are the same across the board. Finally, you’ve got the unexpected repairs: $0 for a new car, $0 for a newer used car, and $0 we’ve spent on our beater.

Lord have mercy! We have saved a difference of $19,836 between getting a new car, and sticking it out with our old, paid for car. But wait, weren’t we supposed to save money by buying a newer car with less maintenace issues? Hell, we could’ve practically rebuilt the entire car and still saved money compared to the new car and even the used car. Those are some huge numbers, and at the end of the day, all three vehicles are serving the same purpose: to carry you, and your shit, from A to B. 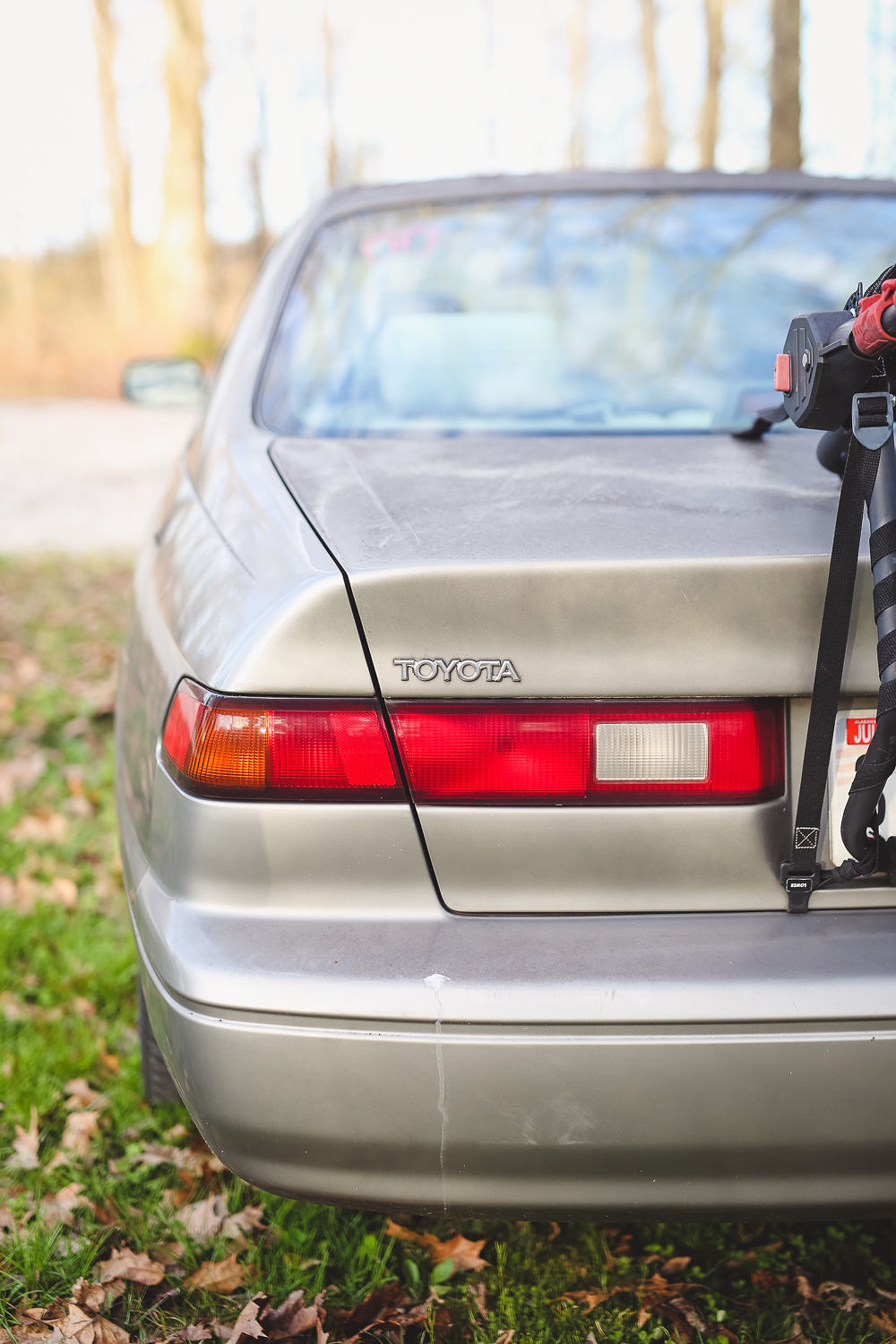 We aren’t even going to add in insurance costs, which I think could skew the numbers even more. But, we would have to dive into the differences in the cost of insurance because it varies wildly by state, driving record, choice of coverage, etc. and that could be a whole article in itself. However, if we did include an insurance breakdown, the beater would just run away with the show because it’s the only one not required to have full coverage. For the sake of full disclosure, we pay $41.50 a month for insurance on the Camry.
To add insult to injury, the new and used car have lost you even more money when accounting for depreciation. The nice people over at Good Calculators have made this easy for us with their Car Depreciation Calculator. So let’s break it down:

I don’t want to over-step here, but it definitely isn’t looking good for the new car, first paying $20k more to own and maintain it for three years, but also to lose $16,700 on the value in the same time period. For those of you thinking that the used car price seems high, that’s the average sold used car in America as of the 3rd quarter last year. Monthly payments have reached an all time high of $400 a month for used cars with a loan term of 66 months. For all the idiots out there, that’s 5.5 years! People are spending 20% of my life paying off a single USED car.
New cars are even more egregious with an average down payment of $4,191, average APR at 6.19%, and average loan length of 69.1 months. Now, they’re even offering 72 and 84 month loans. That’s a hell of a sales tactic: pick up a new car when your kid is 9 years old, and you’ll have it paid off by the time they’re driving. To top it off, there’s a news article that just came out that says “a record number of Americans are 3 months behind on their car payment.” That record number you ask? 7 million people!!
Let’s sum up the graphs and shit for those of you who aren’t following along.

How much has buying a new car cost your future? Not only in money, but also in time. The average net salary in the US is $32,760 after taxes. I’ll be damned, the average new car costs more than a year of the average salary. It’s no wonder the typical American’s financial life looks bleak. The average new car costs the average worker 412 hours a year, or just over 10 weeks of work. Good news, the used car only cost the worker 313 hours, or 7.8 weeks, per year. Our old beater that some people are urging us to get rid of? It only cost the typical worker 8.5 hours a year to maintain. Even if you had to replace your old car every single year, it would still only cost you 111 hours a year to pay for the whole car and continue to maintain it.

It should come as no surprise that we like real estate. Now, how much real estate could you buy in three years with $20,000? You could make a 20% down payment on a $95k place that would be a nice single family home in our area and thousands of areas across the country. You could put 25% down on a small multi-family property for just over $75k (we’ve bought three duplexes for under this price). Hell, you could house-hack a $150k 4-unit property with 5% down and still have $11,500 left over for reserves, and live for free while making money.
The only logical conclusion for us is to continue to drive this Camry until the wheels fall off, or until we leave the country and pass it on to someone else. The hundreds of hours, and thousands of dollars that driving an old car has saved us will put us decades ahead of the typical retirement age. I think I could sacrifice driving around in a newer car for that type of freedom in the near future. How many hours is your car costing you? 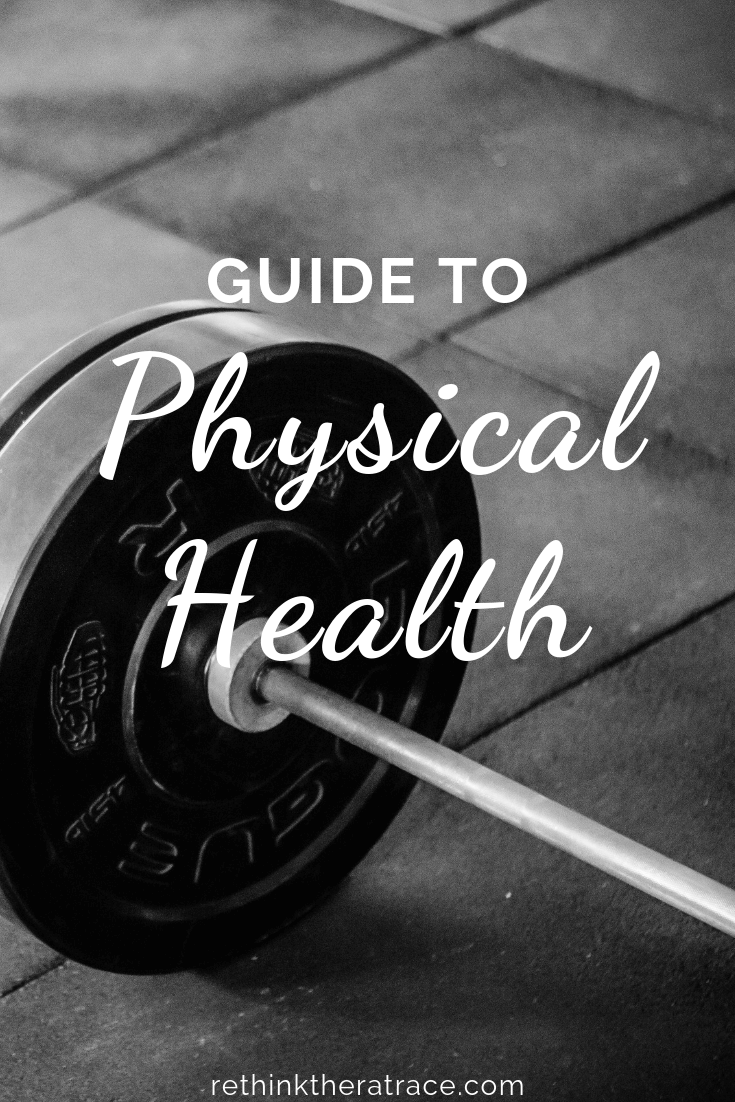 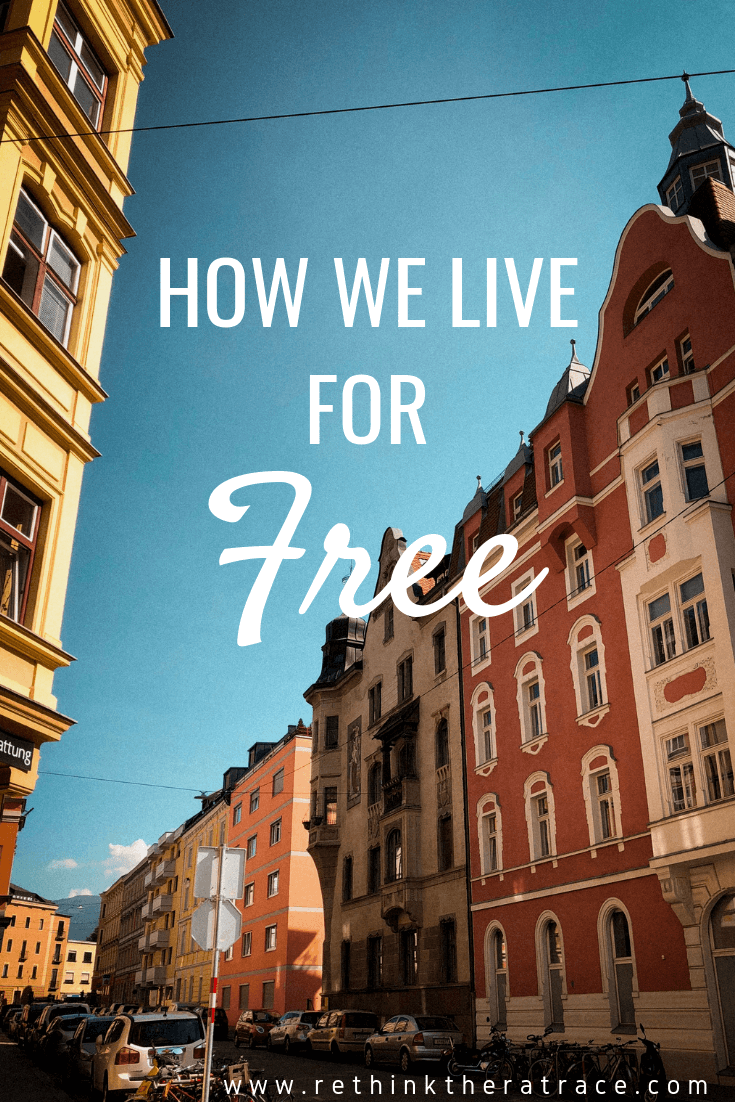 The House Hack that Allows us to Live for Free 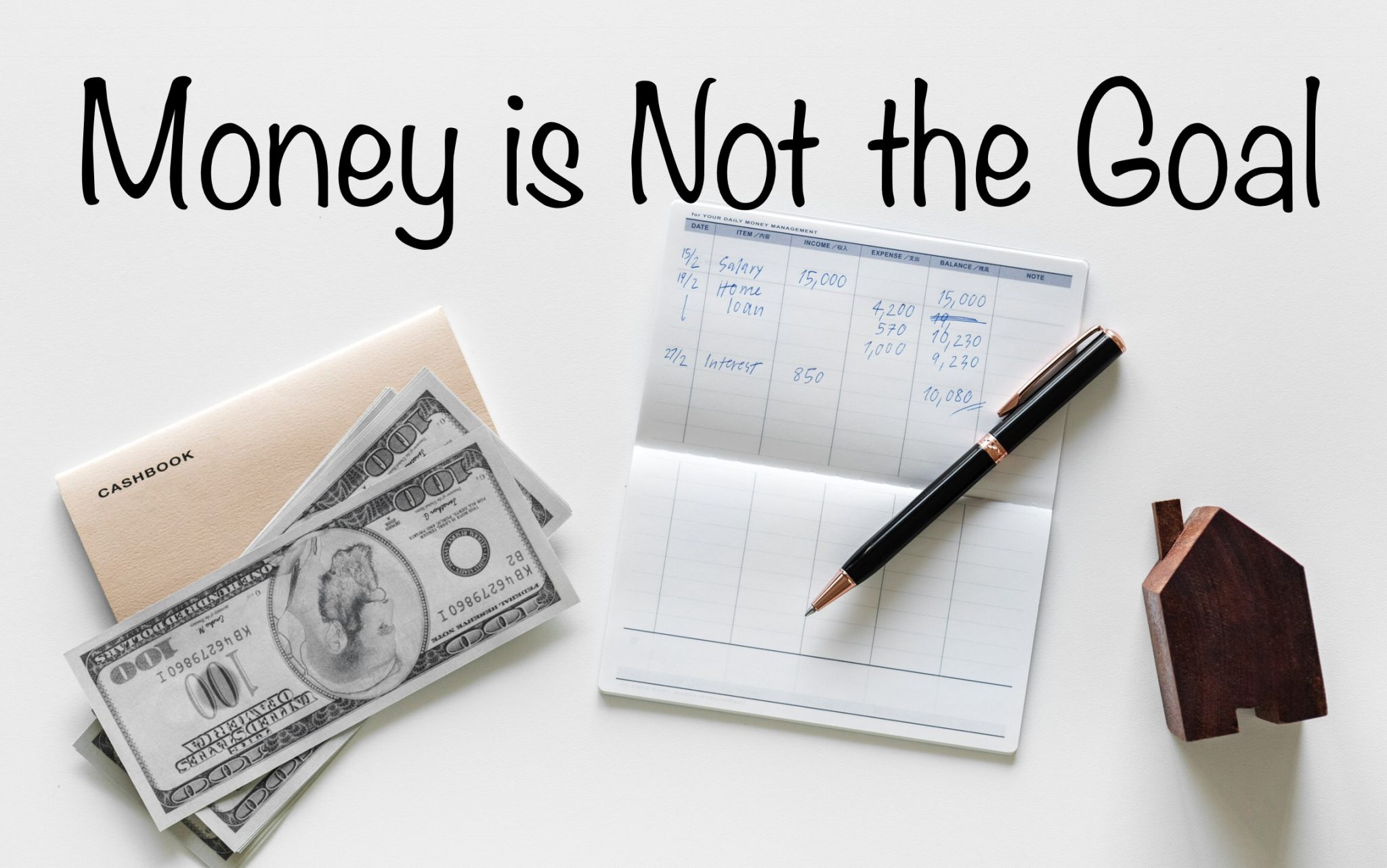 Money is Not the Goal